A Love Story | Cup of Jo 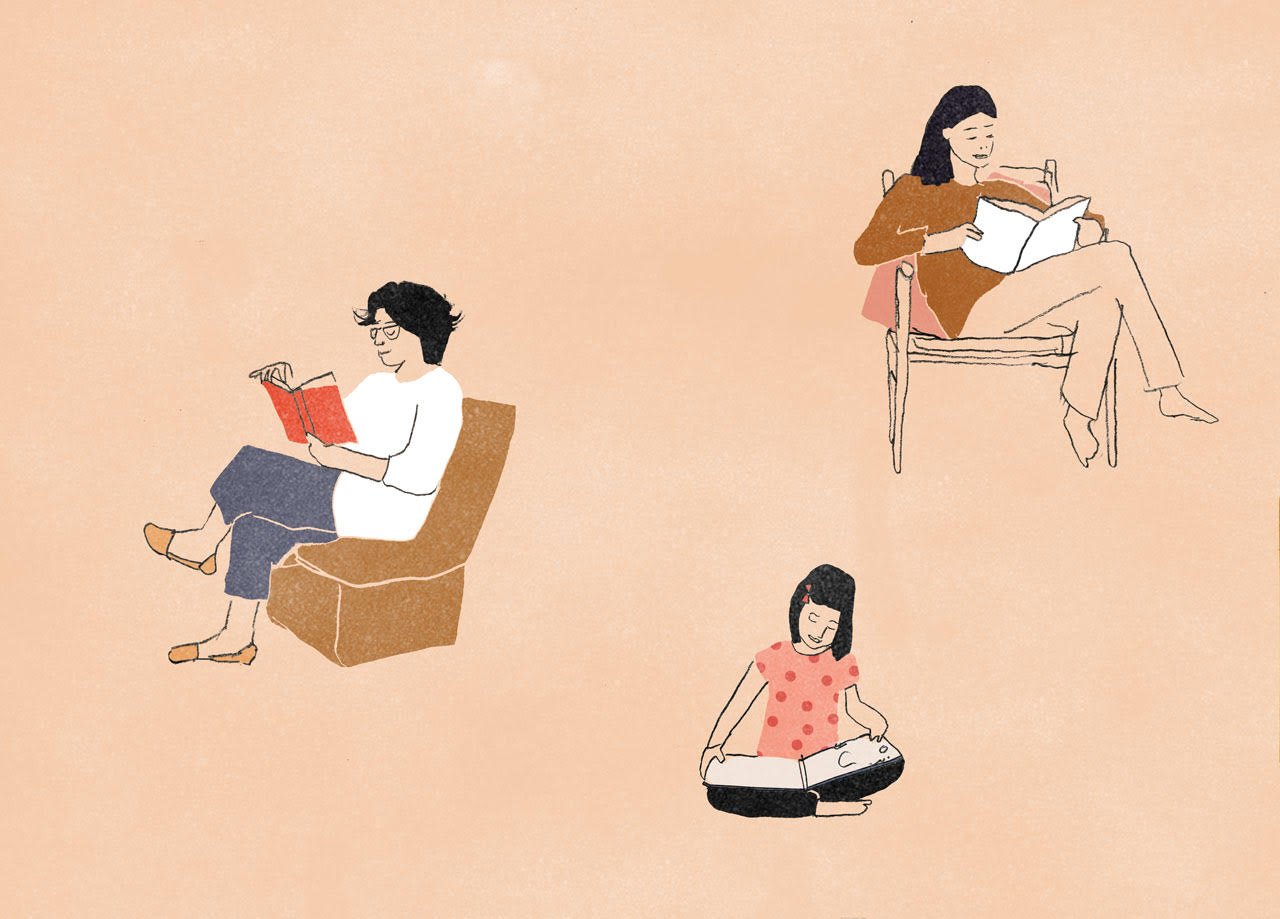 My parents’ first meeting is myth to me. Mom talks about how Dad found his way to her on a college campus in Saigon, light-years away from their hometown on the Mekong Delta, where floating markets bobbed on the water. They had seen each other around, but had not been spoken until that day. Mom was studying in the courtyard when she stopped by her table, all bravado and crooked smiles.

She tossed her head. “Well, you know your dad has been friends with me for decades.”

He laughed, then leaned over her notebook to doodle in the margins. He did not draw a heart in her notebook; he drew apricot flowers. The tiny buds of luck. If Mom found herself lucky to have such a handsome man’s attention, she didn’t say it. She watched him, fascinated. Cautious.

“You like reading?” he asked, his gaze sliding under those dark lashes.

When she nodded, he took that as an invitation. He sat down on the bench across from her and came back every day, bringing his own books. They would read until the sun set, then each would go to their own dorm rooms. By the time their course ended, they returned to their hometown, inseparable.

Mom talks about how strange it was to move, after they married, into the top floor of his folks’ home, knowing she was only a few blocks away from her own family. She missed the way her sister would zoom her scooter into the drive at dusk, dragged down by dessert boxes from her pastry classes. How her teenage brother would gallop into the kitchen, his bare feet slapping the tiles like a duck’s. In her new home, everything smelled different. Nothing felt like comfort.

But then Dad let her in on his secret. He showed her the trunk at the foot of their bed. At first, she thought of treasure, gold coins winking in the dim light of the room. But it was better than that. He had hardcover books stacked in the trunk, each separated by tissue paper. Poetry and adventure stories; and romances, his secret vice. In public, he was a man about town. At home, with Mom, he was a reader. Her bleeding-heart romantic.

“Are these books all yours?” she’d asked. Her fingers itched to explore.

“They’re ours,” he said. Then he pressed a key into her hand. He kept its mate in his own pocket.

I never thought to ask why anyone would lock up books. In my house now, there are books in every room, free for the taking. But back then, they were likely a luxury for my parents. Books, a treasure they found worth protecting. And late each night, even after Dad started disappearing and failing to come home, Mom unlocked the trunk. She got out another novel. She read until the lamplight faded. To her, those books were a promise of something sacred between the two of them; an unconditional bond that was more elusive than love. Even after he transformed from that sweet scholar into a man who could stab a knife through a door in rage, a man who would burn boxes of baby photos out of spite, the books represented the promise extended, and extended, until it finally broke.

Their marriage ended soon after I was born. Then Mom and I spirited ourselves across the world, to a yawning beachside town in Florida, and we rarely spoke to Dad again. I wonder what happened to her key, whether, like her first wedding ring, she keeps it hidden away in her pajama drawer. Or whether it stayed with Dad in the first home they shared, dusted over and forgotten.

One night, when I was seven, I found a secret space at my grandparents’ house in Florida, where Mom and I lived. In the guest room, there was an empty closet with a single lightbulb. If I waited until everyone was asleep, I could sneak into the closet, hauling a pillow and blanket, and switch on the light.

I was a relatively new reader at seven. But once I learned, I couldn’t stop. My backpack sagged with books I grabbed from the library. First came picture books, then chapter books. One day, novels with words I had to look up. If the books ran out, I salvaged my grandfather’s newspapers from the trash. In my secret closet, I read until my eyes drooped. More often than not, I fell asleep in the closet and had to scramble to my own room before the world stirred.

One morning, I didn’t wake up in time. I could hear my family calling my name. Their footsteps were close, thunderous.

“I’m here,” I said, crawling out of the closet. Sheepish. They saw the pillow and the blanket, the strewn books.

My grandmother pinched me on the arm, hard. I worried it would leave a bruise, one I’d have to cover with a sweater, even in the heat of a Florida spring. “You have no common sense. Scaring us. Scaring your mother. For those stupid books of yours! ”

But Mom, surprisingly, wasn’t angry at all. Standing in the doorway, her hair tousled, she rubbed her arms as if to shield herself against unseen cold. As the years passed, her anger had become fierce; it rose like a dragon, then sailed with the wind. I never knew when she might yell. But that day, her face was calm. If I looked closely, I could even see her hiding a smile.

She bought me a book light later that week.

Over the years, Mom snuck books into my room like a contraband. My grandparents didn’t believe in spending money on luxury items. I hid them under the bed, within the pockets of my backpack. Once, Mom drove to a neighboring city with a three-story library and paid the $ 20 fee to get me a card. She had not realized that non-residents had to pay extra, and she grumbled the whole drive back. “$ 20 is one hour on my feet at the restaurant, including tips.” But every Saturday, without fail, she drove the 40 minutes to the library for my books.

Mom remarried when I was 10, and we moved into a new home with my stepfather. Finally, I could buy books whenever I wanted. We got new shelves to hold them all. When I turned 15, I got my learner’s permit; I drove straight to the Books-a-Million, ordered an Italian cream soda, and minced up and down the aisles until the store closed.

After I moved out for college, Mom wondered what to do with all my books. I’d never known her to be a reader – I couldn’t imagine her reading anything longer than Bon Appetit or the occasional Us Weekly in line at Publix. I don’t remember her reading to me, either, but memory is fallible. I think I felt some pity for her. To have never loved books was, to me, a great loss.

“I could keep your books for you,” she offered.

“Just give them away,” I said.

“But what about your children? One day they’ll want Mama’s books. ”

I rolled my eyes. “I’ll buy them new books.”

These days, my husband and I have a nightly argument with our five-year-old daughter. We’re all in pajamas, huddled in bed by the electric fireplace. She holds a bookmark high in the air, wailing.

Her lips draw into a pout and her lashes bat. A charmer, like her lost grandfather. I’m struck by her phrasing. If you give me one more chapter. She talks of words as a gift to be exchanged. She’s not wrong.

When my mom visited one Christmas, my daughter asked her to read a bedtime story. Mom was hesitant, but unable to resist. She stumbled over the words; English is not her first language, and the cadence of children’s books often requires some settling in. She kept apologizing.

But she made it through the picture book, my daughter nestled into her lap, Mom’s chin resting on her head. After my daughter fell asleep, Mom told me about the locked trunk full of books in Vietnam. The man who held the keys.

“I think about those books all the time,” she said.

I wonder if she means that she thinks about him. I once asked her why she stopped reading, but she didn’t have an answer to share. Time was a luxury for her in America as a single mom, working long hours at jobs that demanded so much. Books written in Vietnamese were not as easy to find back then. And when she remarried, her new husband did not read books at all. Their love language was action, not words: fishing down at the pier in the peach-blush morning; sharing a halved cinnamon bagel on a park bench. And now? She still refuses my offers to ship her books written in Vietnamese. Perhaps her love of reading got left behind, too, across the ocean with Dad.

We are secret keepers; each heart fitted with its own lock. The lock’s shape changes over the years. Sometimes, it can be opened by a man with a pencil in a flower-scented college courtyard; sometimes by a little girl with batting eyelashes. Books are like that, too. They conceal, then reveal. They dust over. And sometimes they skip across time, across countries, leaving impressions as deeply grooved as knife-marks in wood.

Thao Thai is a writer and editor in Ohio, where she lives with her husband and daughter. Her debut novel, Banyan Moon, is forthcoming in 2023 from HarperCollins.

(Illustration by Alessandra Olanow for Cup of Jo.)